Gooooolll! Who Will Win The World Cup?

It’s been a month since the World Cup began and as usual, there were quite a few surprises in these matches. Seriously – did anyone see Germany getting bumped in the first round?! Here at Webz, everyone was psyched and so we did a friendly competition to predict the winners.

Not surprisingly, the majority of the Webz.io crew predicted Brazil to be the champions, while some were certain Germany or Spain would come out on top and only a handful of lone sharks set their hopes on Argentina, England, or France. But how did our guessing come up against the rest of the world? And can crawling the web help predict the fate of the top contenders?

We decided to run an analysis using data on our available review sites, blogs, and online discussions to understand who the winners will be.

Based on World Cup searches associated with each country, when the Mundial began, the top contenders were similar to the Webz.io guesses. Although Russia wasn’t an expected winner, they are the hosts, so it’s not surprising that they led the searches online. 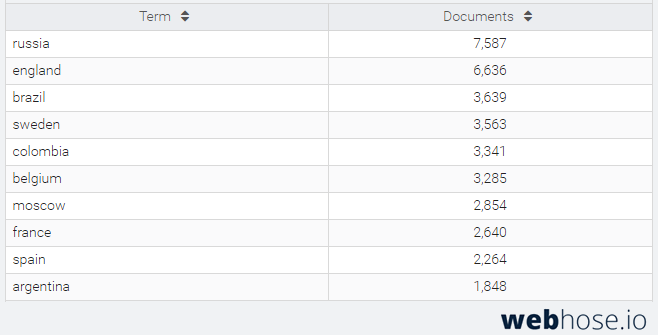 And yet… over the last 3 days, Croatia has surpassed France in searches.

Three Days to World Cup Finals. And the Winners Are?

With three days to go until the 2018 World Cup Final, searches for Croatia saw a huge spike. Could this also reflect the winner? 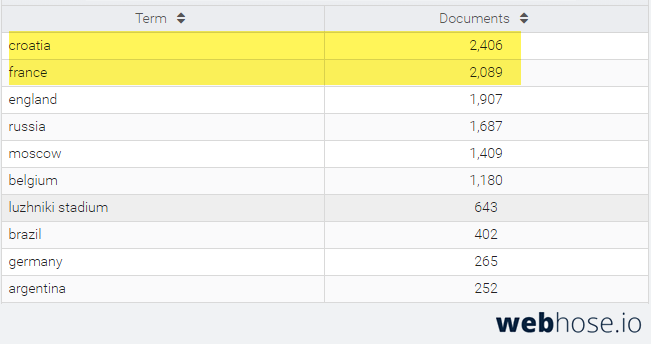 Stay tuned for our full analysis after the game.

Update. We Have a Winner: France!

Well, so we didn’t quite nail the World Cup winner at Webz.io (except for the one French fan), but we did confirm that everything is connected. When the World Cup began, there was barely any interest in France, never mind Croatia.

As the popular teams got eliminated (Brazil, Argentina, Germany!), more and more attention went to the “underdogs.” Funnily enough, everyone expected England to fall immediately, and as they became stronger, more sites covered their Cinderella story and placed hope that maybe this will be their year.

But alas, Croatia, a team that everyone assumed wouldn’t last, held strong and managed to eliminate first Denmark, then Russia, then England.

After each match advancing Croatia, more interest grew in them, clearly evident in the data across the web. That’s why yesterday, when we ran our “prediction,” based on the volume of searches for Croatia, it made sense that they would surprise everyone and take the Cup.

But online interest and performance are two separate things; while they played an outstanding game, ultimately France came on top and succeeded in taking their second-ever World Cup. Congrats to both teams. One thing is certain – here at Webz, we’ll continue to follow the leagues and cheer on our favorite teams!

Who did you root for? Share in the comments.