The Danger of Fake Reviews

How to Spot Fake Reviews in Time for the Holidays

Black Friday is here, and as the biggest shopping day of the year, it means a lot of people will be on their favorite ecommerce site this week shopping for the best deals. In total, Black Friday is estimated to reach almost $718 billion in sales this year, with sales having  increased by 3.5% in the last 10 years. Almost half of all Black Friday shoppers rely on Amazon for their consumer needs, while Walmart and Best Buy are also favorites for consumers.

So how can shoppers differentiate between all of the different product offerings during this busy shopping season, and ensure they are buying a quality product at the best price?

The Power of Online Reviews on Consumers

Consumers sift through ads for products and evaluate them based on price, features, brand reputation — and most of all, reviews. If you aren’t convinced by how much the power of an online review can persuade a consumer, here are a few statistics:

Just a few years ago, reviews were manipulated by sellers who offered discounts on products in exchange for reviews. This was a practice Amazon allowed until 2016. (The problem still exists, but sellers can no longer offer discounts in exchange for reviews on the Amazon website). Now, fake reviews are rampant, making honest reviews more rare and fake reviews more difficult to spot.

Here are a few types of fake reviews and how a consumer-facing businesses can spot them using a good web monitoring service.

One way to spot a fake review is if you are able to find good reviews on one ecommerce platform, like Amazon for instance and bad reviews for that same product on other platforms like Walmart or Best Buy. With a good web monitoring system, however, product reviews can also be compared across different sites and fake reviews can be easily identified.

Here’s a query you could run on Webz.io to identify the exact scenario above: 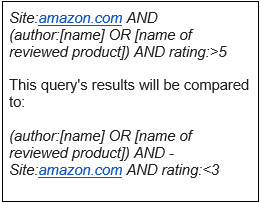 2. Many Excellent Reviews in a Short Timeframe

When many 5-star reviews are published quickly, all during the same timeframe (for example, over a period of 24-hours), it’s another sign of possible fake reviews. Of course, this can also be true when many bad reviews accumulate quickly as well. 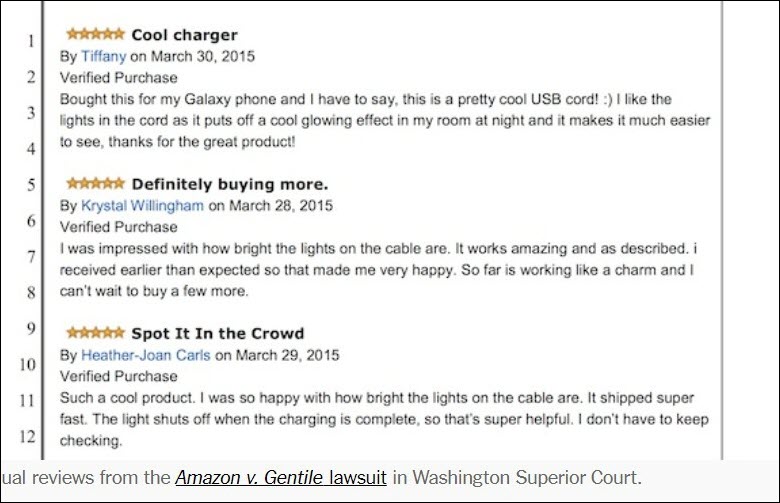 Here is the query which Webz.io could run for a consumer-facing business to identify these problematic review trends for any particular product: 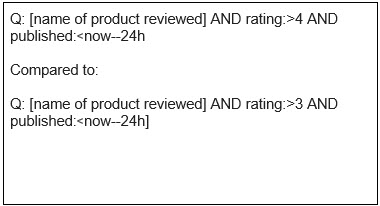 3. Repeated or Similar Phrasing of Words

Another type of fake review can be spotted through identifying key phrases which are often repeated. For instance, a reviewer might often rave about a product, using similar phrasing or adjectives each time. If data analysts can quickly and easily gather the data together, they can then analyze  the key phrases found in the different reviews. These businesses can avoid wasting time and effort on resources to gather data, instead concentrating their efforts on data analysis to identify similar fake reviews through a site like Amazon or Walmart. 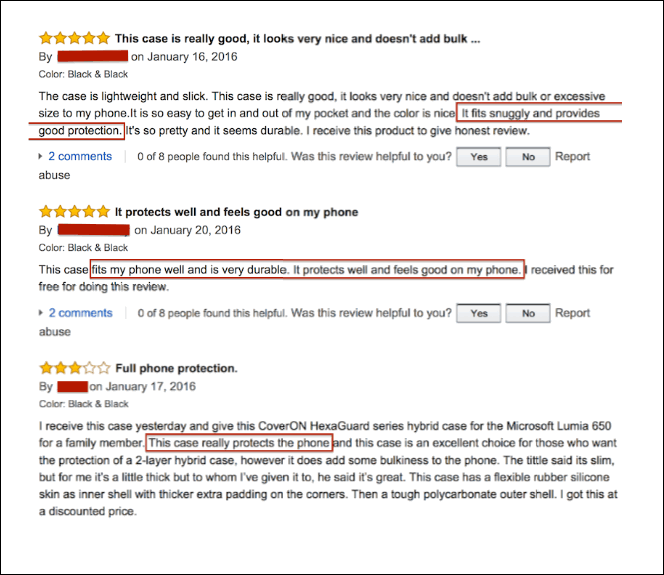 In these three reviews for a case for the Lumia 650 Smartphone you can find similar phrasing of reviewers describing how well their phone fits. (Note that these reviews were actually published before the launch of the product, another clear giveaway that the reviews are fake).

Here is the query Webz.io would provide to gather the data, which would later need to be enriched by a team of data analysts to find the similar phrasing similar to the example.

Another dead giveaway of a fake review is if many reviews seem to be copy-pasted one after another. With a web monitoring service such as Webz, customers can compare between templates of tens of thousands of reviews, spotting any similar templates which might be used as templates for quick and easy fake reviews of knockoff brands, for example.

Here is an example of a Webz.io query that could compare templates: 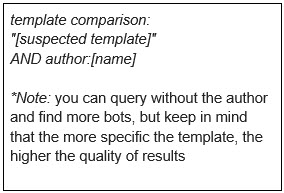 Don’t underestimate the power of online reviews and their influence in a consumer’s choice of product. As Bart de Lange, Associate Professor of Marketing at Escuela Superior de Administración y Dirección de Empresas (ESADE) in Barcelona, Spain, and author of a recent study on the validity of online ratings explains: “Historically, consumers have relied on price and brand to determine the quality of a product. But what we found is, as soon as you give consumers access to the average user rating, it blows away the other effects.”

That means being able to identify a fake review is even more important today for consumer-facing businesses than ever.

Want to learn more about how your business can detect fake reviews with web monitoring? Check out Webz.io’s Online Reviews API now.

The following short story portrays the surprising technological and logical challenges we faced while developing our dark web monitoring technology. Back in 2017 when I initially had the idea of adding content […]

How Webz.io Uses Image Analysis and Recognition to Identify Illicit Content on the Dark Web Collecting data from the Dark Web is immensely more complex than it is in the open web. […]

How Does a Web Crawler Work?