News sentiment–the opinions, emotions, or attitudes presented in the news– can play a significant role in customer and investor behavior. As a result, brands and organizations, for example, may want to know the sentiment regarding a particular product or a relevant event. They may also want to discover any correlations between an article’s virality and the different entity sentiments in it. Financial institutions can also use news sentiment to gain insight into future market movements.

How then, can organizations best measure news sentiment to gain these types of insights?

The Advantage of Entity-Level News Sentiment 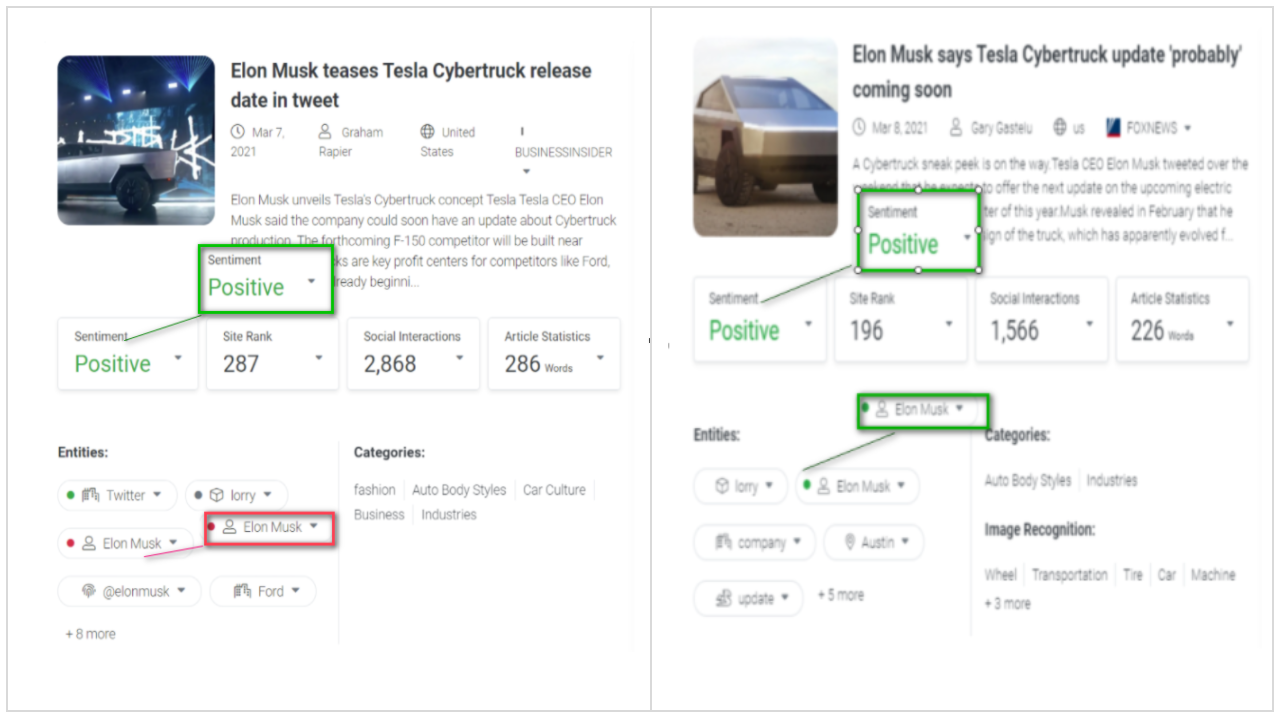 Other articles about the Tesla Cybertruck have a different set of sentiments for the same entities. In the result on the above right, “lorry” is neutral and “Elon Musk” is positive.

Here is another query for articles with a positive sentiment polarity about the stock ticker TSLA. The article above has an overall negative sentiment, but a positive sentiment for “Elon Musk.”  This article was written for a publication about pop culture and does not have an ironic tone.

All of these different entity-level search results are interesting, but analyzing articles individually doesn’t demonstrate the full value of entity-level sentiment. It’s when thousands of articles and entities are aggregated at scale that the real magic happens.

Here is a partial list of entities detected from a search for the topic of “Olympics” and their corresponding positive measurement in 9,547 articles.

Insights into the Tokyo Olympics

Interestingly, athletes qualifying for the United States Olympic basketball and wrestling teams had the highest entity sentiment scores averaging around 80%. The scores were slightly higher for  male wrestlers than for  female wrestlers, but not by much.

If we compared a list of the number of times “male” and “female” appeared in the different articles and their corresponding sentiment, would there be  a significant difference? Can we attribute this difference to a preference for male athletes over female ones?

Another highlight we found was that soccer athletes qualifying for the US team had lower positive sentiment scores ranging from 58% to 70%. Can we correlate this result with how Americans perceive soccer as a sport? In general, do more experienced athletes, who would also get more mentions in the media, have a tendency to have a higher positive sentiment?

Finally, if we drill down according to the author or reporter of different articles, would we see that articles by the same reporter on a certain sport or about particular athletes have a higher or lower sentiment? Does this sentiment reflect an accurate public opinion of those sports or athletes?

These are all types of insights that entity-level sentiment can help deliver.

News sentiment analysis at the entity level delivers a more granular viewpoint. This is particularly valuable when looking at thousands of articles and entities to determine patterns and trends. Financial institutions can then apply these insights to their predictive models. Brands can start to distinguish between changes in brand or product sentiment. Organizations conducting risk intelligence can more easily detect adverse media.

Webz.io’s Enriched API can give these organizations the high-quality news sentiment analysis they need – on both the article and entity level.

Want to get started infusing high-quality NLP-enriched news into your product or application? Contact our data experts today!

Why is News API So Critical To Risk Intelligence?

Learn how a good News API can help risk intelligence teams keep ahead of emerging risks.

Coverage, latency and quality of news data are the keys to a robust media intelligence service, so choose your data provider carefully

Here’s how we used our News API to find out how the media reacted to Simone Biles’ decision to withdraw from the Tokyo Olympic final.