All About 4Chan – Webz.io Source Review

4Chan is an imageboard on the open web with 900K daily posts allowing total anonymity to post illicit content.

An English-language imageboard website with over 3.5 billion posts, 4chan is unique for allowing its users to post content with total anonymity. As an added security feature, posts time out and disappear after a period of time, so they cannot be found by users or law enforcement.

The site guarantees anonymity in several ways: Users cannot register to 4chan, and they can post without a username by leaving the name of that field blank. This anonymity lends itself to a wide variety of illicit content and has received media attention as a source of numerous controversies, including cyberbullying, a source for child pornography, harrassment, threats of violence, misogyny and racism.

But it is important to remember that 4chan was originally focused on discussion related to anime, a Japanese style of film and television animation also known as Japanimation. The community of users is known to have been influential in spreading benign internet memes like lolcats and chocolate rain.

On the homepage of 4chan you can see a wide variety of board subjects, ranging from Japanese culture to politics and adult content. 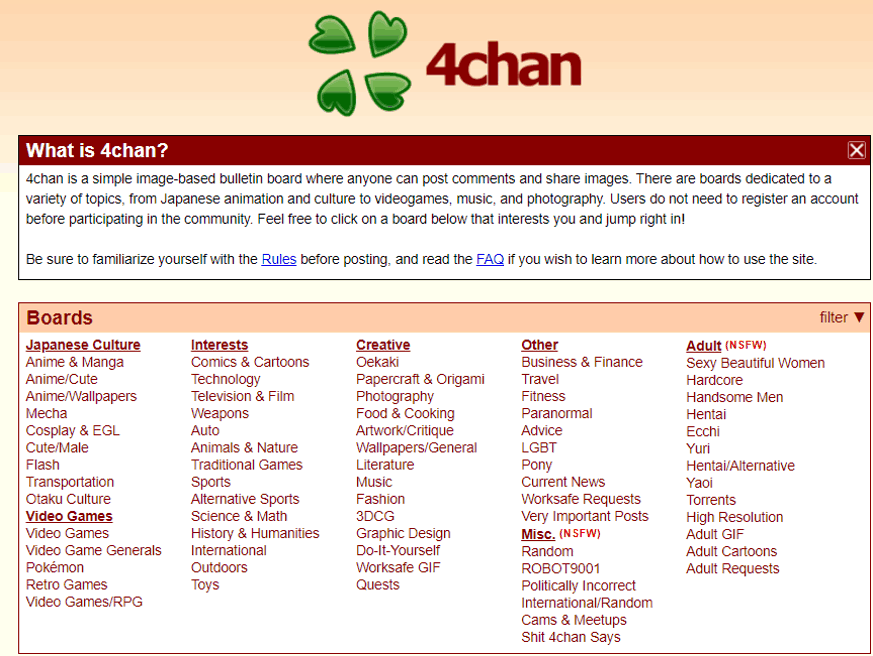 The Split into Two Different Domains

In 2018 the site split into two different domains: 4chan, with content not suitable for work (NSFW) and 4channel, content safe for work (SFW). This was a move to encourage mainstream advertising for the site that previously did not want any affiliation with adult content.

The open web 4chan domain currently has a lot of illicit content related to antisemitism, the alt-right, threats of violence, and data leaks from notorious hacking groups like Anonymous as well as data from well-known organizations like the World Health Organization.

Here are a few brief descriptions of some of the more illicit imageboards on the open web site:

The /pol/ imageboard discusses current events, politics and world events, although mainstream media has described it as neo-Nazi, racist, sexist and having white supremicist, alt-right support.

The /b/ imageboard was originally the first board created on the site, largely dedicated to pornography. Although the board had a rule banning child pornography and other types of illegal content, it is difficult to moderate due to the anonymity of the site.

4Chan is just one of the many imageboards Webz.io Dark Web Monitoring API can monitor on the deep, dark and open web. We also keep track of trends, like the sudden shutting of imageboards by authorities, cross-posting on various forums or the divulging of specific, actionable intelligence – like attackers posting their manifestos on the site. It is our hope that this data can help law enforcement and security officials to thwart attacks on citizens and save lives in the process.